WinterAnd I’m off to the library to put in my orders!

I’ve only read one of these books – Pat Barker’s wonderful retelling of the Iliad, so it definitely looks as though I have some interesting reading ahead!

Books I’ve read in February/Early March (or as many as I can remember!):

Daisy Johnson, Everything Under. This is a retelling of the Oedipus myth. I have an audio copy and loved it, harrowing though it was. Some beautiful, inventive writing throughout. Read an interview with the author here. So interesting that she mentions Keri Hulme’s The Bone People but, if you read Everything Under, you will understand the connection, I reckon.

A Thousand Splendid Suns by Khaled Hosseini. This was my book club’s choice for March. This also deals with a mother/daughter relationship but in far away Afghanistan, rather than the riverways of England. Harrowing? Yes.

How to Get Filthy Rich in Rising Asia

Both the above are by Mohsin Hamid and I read them as prep for teaching Exit West at the CAE. Hamid’s ability to experiment with different writing styles is really interesting. How to Get Filthy Rich in Rising Asia is framed as a self-help book while The Reluctant Fundamentalist is a long monologue. In contrast again, Exit West uses a story-teller omniscient narrator. Harrowing? Yes – particularly How to Get Rich.

Just Kids, Patti Smith. I meant to read this before seeing the Robert Mapplethorpe exhibition in Sydney last year, but ended up reading Tracy Chevalier’s Lady with the Unicorn instead. We saw that exhibition at the same time – bit of a contrast! Smith’s commitment to art is unswerving. So, despite harrowing bits, this was more inspirational.

Don’t Cry, Lake Tai, by Qui Xialong. I love Xialong’s poet detective Chen! And the descriptions of China, its politics and food. That sounds like an odd combination until you read these detective novels. I started reading him after a Brisbane Writer’s Festival where Xialong was one of the guest writers – reading with a bunch of other poets, including me, at the Queensland Parliament House. Everyone in the reading was sent everyone else’s book and I was hooked! I read what I could find lickety split and then my source dried up and I moved on to different books until listening to the Slightly Foxed podcast where he was mentioned. This sent me on a new quest and I rediscovered Detective Chen at my local library.

Moon Country by Simon Armitage and Glyn Maxwell. A poetic journey to Iceland made by two UK poets.

These last two I’ve been reading as my poetry group have been looking at the former. It’s a hybrid book but I do love much of it. I suspect I’ve been doing some armchair traveling as we will only be going local places this year. And part of the reason for this is also the reason I’ve read… 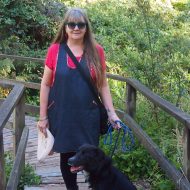 The Other End of the Leash, Patricia McConnell. Fascinating account of the many differences between primates and our canine companions. Harrowing? No – although her account of being nearly mauled by a mastiff… 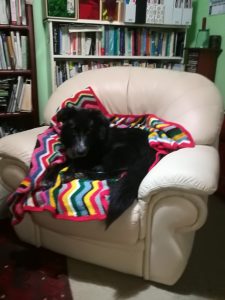 Winter in my office.