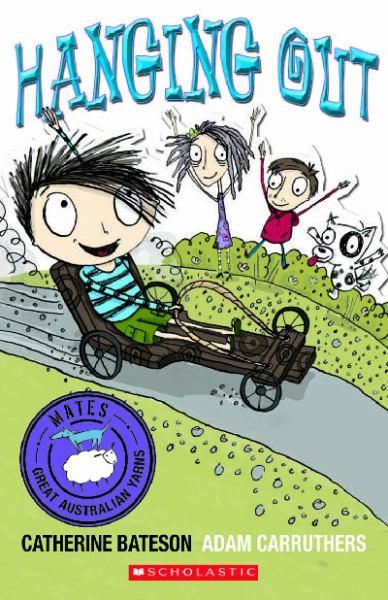 Ben is worried about his Sydney cousin coming to stay. When they stayed Weston and his family they had visited everywhere from the zoo to the harbour bridge and more. Ben is worried that Weston will discover that he was exaggerating the wonderful things about Melbourne. But despite his misgivings, Weston arrives. He’s keen to do and see all the things Ben bragged about. After a slow start, Ben discovers that they can have just as much fun at his house, and that Weston is just as impressed with Ben’s Melbourne as Ben was with Weston’s Sydney.

Hanging Out is part of the Mate series from Omnibus Books. They are beginner chapter books for newly independent readers. But they also celebrate what it is to be Australian. The rivalry between Sydney and Melbourne is explored and gently rocked. Catherine Bateson points out that home is where family and friends are, that the rest is just bonus. Ben and his cousin rediscover just how much fun they can have together. Many of the offerings in this series are tall tales. Hanging Out is less tall tale, but no less iconically Australian for that.

A video for my FAQs series, and the sub-series about my book ‘Hanging Out’, published by Scholastic. The question for this video is “Are the places in ‘Hanging Out’ real?”