How well do you think you know a given building? I would have thought that my recall of the State Libraries of Queensland – the old one and the new – and of various libraries in Victoria would be pretty good. Over the years I’ve spent a lot of time reading, writing and researching in them. I once had a confrontation with the cloak room attendant at the old Queensland State Library, the one with a pretty dated mural on the front. But you see – I remember the confrontation and the mural and not much else. I’d probably do better with the Docklands city library where my favourite seats overlook the Docklands marina and you can read magazines with your coffee.  Or the Katheen Syme where there’s a Makers space upstairs with lots of interesting equipment I was just beginning to learn to use when the pandemic struck. 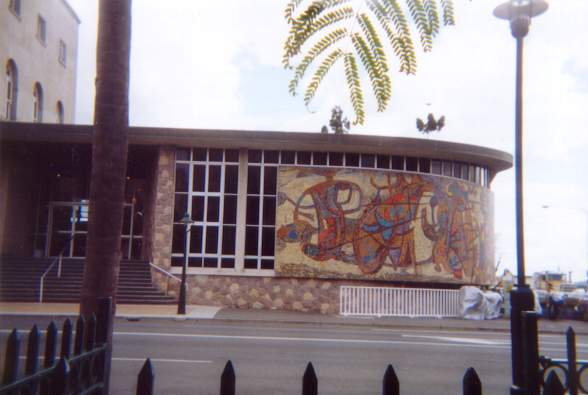 My real knowledge of these places is minimal. I can’t tell you the mural artist’s name or when it dates from. I can’t name one artwork on the walls of the new QSL – only that I love the sandstone buildings that make up that precinct and that the walks in between the buildings are always cooler than anywhere else, as though they tunnel the slightest summer breeze to refresh lunchtime loiterers. I can’t remember the names of the cafes at the Docklands or the Kathleen Syme. I can’t even tell you when the latter was built.

So it was with awe and fascination that I read – and re-read – Proust’s account of the church at Combray. His description goes for around seven pages and it’s just one glorious mouthful after another, interspersed here and there with snippets of neighbourhood life ‘one would see Mme. Sazerat kneel for a moment, setting down on the next prayer stool a packet of petits fours tied with string that she had just picked up from the pastry shop across the street and was going to take back home for lunch…’

Proust’s leisurely and lengthy sentences express the kind of intimate knowledge we have of close friends or family. The sight of its steeple indicated that it was time to ‘gather up the rugs’ and prepare to disembark from the Paris train. The base is a timekeeper for the young narrator – when the slates blaze ‘like a black sun’ it’s time to give Aunt Leonie a kiss before Mass. The grandmother loves its ‘strange old face’ of it and declares, ‘I’m sure that if it could play the piano it would not play dryly.’

As the child of a Theosophist mother and a Rationalist father, churches were not on my horizon. Eventually I found my way to the Society of Friends and became a sometime attender of Meeting for Worship. It’s less about steeples. There was very little difference between the room we met in for Northern Suburbs Meeting and the Paris Meeting room I found myself in during July 2013.  There was the same central table bearing relevant books, a similar faded carpet, an optimistic number of chairs placed in a circle and a welcoming Clerk of Meeting. I sat down, gathered myself and felt completely at home. After one Meeting, I went to a gospel concert at the 13th century Saint-Julien-le-Pauvre – from silence to sublime voices rocking the dead.

It’s easy to romanticise the church if you grew up without organised religion and I do, in the same way I have an idealised view of the large family which does not admit feuds, rivalries or jealousies. I have returned to those seven pages of Swann’s Way over and over and not just for the pleasure of Proust’s passages, breathtaking though they are.  It’s Saint-Hilaire’s centrality that intrigues me, too  – landmark and lifeline rising up between M. Rapin’s pharmacy and Mme. Loiseau’s house, garlanded with the latter’s fuschias, and treated with an equal mix of reverence and easy familiarity.

Mostly those pages exhort me to pay attention. What, they ask, can you see? Not at a glance, but with the rare concentration of your entire sensory focus and over a period of time, taking in the changes of each season and shifts in the weather?

Perhaps the closest to Saint-Hilaire I can come to is the patch of Sherbrook Forest where I’ve walked for the past few years. The mountain ash steeple to the sky, the lyrebirds show-off their borrowed calls and now, in spring, there are a hundred and more greens, from the strident new-growth of the Mother ferns to the pale eau de Nil lichen patches, ghostly against dark bark. The other day I opened a bag I haven’t used since last summer and a handful of crumbled vegetation fell out – small twigs I’d stolen from the galaxy of snow daisy-bushes that line a part of Neuman’s track. I’d taken them home to embroider the starry flowers.

Maybe the whole great Proust adventure is a lesson in this as much as it is anything else.