Monsieur Proust, Memory and the Truffle

I’ve ordered a black truffle for my birthday. It was done in a post-Moderna-vaccinatin haze of fatigue and, admittedly, my birthday has past but still. It’s a seasonal culinary experience and as the household person who does a good ninety percent of the cooking, I figure I deserved it. 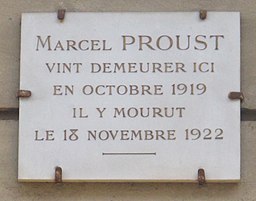 ‘It’s your money,’ my husband said when I’d recovered enough to tell him.

I waited two beats and then said I’d added oil and salt to the order. He looked a little pale. That may have been the result of a boozy lunch with his mates, but it may also have reflected his fear of imminent truffle-induced poverty.

The conversation turned when I pointed out the packet of Earl Grey tea he had brought home was entirely superfluous because I’d already bought tea from our tea and coffee merchant and four hundred grams of Earl Grey was sitting on the shelf under the coffee beans where he himself had unpacked it.

My truffle extravagance, I pointed out, amounted to less than our latest tea and coffee purchase.

‘That’s necessary,’ Keith said. But his heart wasn’t in it.

I wanted a black truffle because only weeks before, at the private launch of the Monsieur Proust Project, B. my friend and fellow reader, her sister and I had collectively had our first truffle tasting. H. had brought the truffle back from Tassie as a pet-minding thank-you. We sat clustered around the kitchen bench receiving remote funghi instruction from a mushroom-expert of B’s. Every minute or so her phone would ping announcing anther item.

‘Cut the shiikate mushrooms into quarters. Cook them separately.’

‘Only one leek. You want the mushrooms to be the big taste.’

‘The hero of the dish,’ I murmured. The MasterChef final was the following week and I was into heroeing ingredients, pivoting and welling up in public.

‘Do you have a truffle shaver?’ the phone pinged gain.

B rang Linda this time. ‘Would a veggie peeler do?’ she asked plaintively. 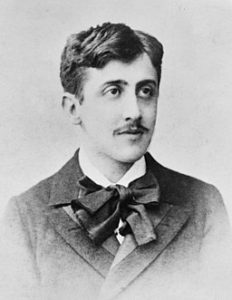 The veggie peeler was given our expert’s imprimatur but we were advised to peel the truffle backwards.

While the leeks simmered in their wine and the shiikates were quartered I read the opening pages of Swann’s Way.  We toasted the beginning of the Proust Project, B shaved the truffle and served the gnocchi on her sixties, geometric patterned tableware. We ate in religious silence.

All that happened only days before my ninety-one year old mother required an emergency trip to hospital where she was hooked up to IV antibiotics, eventually, and sent home the next day weak and more confused than usual. A nightmare week unfolded. My mother refused to eat. She couldn’t get herself off the toilet or back comfortably into bed when we hauled her off. She didn’t like drinking anything because then she’d have to and the whole painful sequence of events would begin again. In desperation I bought re-hydration powders and Sustagen. I added honey to herbal tea and eventually coaxed her to eat fish fingers.

She woke me in the early hours of every morning for about a week. Sometimes it was simply help with the toilet. Other three in the morning calls were more random. And more worrying.

‘Where’s my COVID twister?’ she demanded.

‘I don’t know what you’re talking about.’

‘It’s red and yellow. You twist it,’ she said with increasing agitation. ‘You use it to stick the cream up here.’

I shone the phone torch where she was indicating. It was her nose. Could it be that she meant the RAT? But they weren’t red and yellow.

‘You twist it,’ she said urgently.

I played the torchlight around the bedside table. It was three-thirty in the morning. I needed inspiration. And there it was. A red and yellow tube of lip balm. The COVID twister.

Another morning she couldn’t sleep and could I tell her how? She’d closed her eyes but it wasn’t completely black. And another time she summoned me to announce, ‘Catherine, BAM!’ Then said she’d forgotten the word that allowed her to sleep. I told her it was goodnight and she repeated that and closed her eyes obediently. It was only the next day that I translated the mysterious bam into a request for Panadol.

My husband and I ordered rails for the toiler and the shower. ‘We can do this, ‘ we told each other every evening, reaching for the wine. ‘We knew what we were getting into.’

Except that we didn’t. Not really. And not the whole horror. We didn’t foresee the sly digs she made when she was well.

‘Oh, you promised to obey when you married her, did you?’ said to my husband when, taking my lead, he refused to serve dessert until she’d eaten her actual dinner. Or, to me, ‘Cleaning? I don’t know why you waste your time. Your father and I had a cleaner.

Right. That was a six month period in England. Before I was born.

‘You’re so domesticated,’ she says, as though it’s an insult.

Domestication is an act of rebellion. A childhood of chops and three veg and a house filled with the spill-over books from our second-hand bookshop did not prepare me for quiet order. Hell, I couldn’t even make a bed until my ex-nurse step-grandmother drilled me on hospital corners. Not that I minded this dishevelled chaotic upbringing but when I snatches of a calmer, more ‘curated’ – to use the contemporary term – life, I wanted that, too. Our beautiful things – and we did have them – teetered on a pile of books waiting to be priced or were jammed in a cupboard, out of sight. My step-grandmother’s were in glass cabinets, dusted weekly and never sold.

At home, I’d fall in love with a French clock with dancing figures that revolved on the hour. When I returned from boarding school for the holidays, it would have been sold, along with my Japanese doll who had five wigs that could be changed. ‘You weren’t playing with it,’ my mother said. ‘I thought you were too old for dolls.’

‘It wasn’t that kind of doll,’ I said. ‘You didn’t play with it. You put a new wig on her and then she was ready for a tea ceremony.’

At school, I hung on to my possessions grimly, refusing to lend anything dear to me.

Domestication means more to me than hospital corners and dusting. It means sleeping between sheets you love. It means having a variety of vases and serving dishes. It means making sourdough which is proved in the correct little cane basket before being turned out into a French blue dutch oven.

It nearly meant ordering a truffle shaver to accompany the truffle oil, mustard and salt. I resisted – perhaps hearing Keith’s incredulity in my mind. ‘How many truffles do you intend shaving?’

A good question. It could be an annual extravagance to mark the end of one volume of Proust and the commencement of the next.

When the truffle arrives, I will be the most avid consumer. My mother will announce she’s ‘gone off mushrooms,’ and my husband, with his annoyi 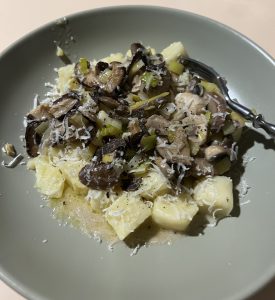 ng English reticence, will say, ‘quite interesting.’ I’m tempted to invite my son and his wife to the inaugural truffle shaving. But then, rather than being transported back to the warm and camaraderie of the Monsieur Proust launch, I’d be creating a new memory and I’m not sure that I’m ready for that. One of the stranger joys of cooking for people who are largely oblivious of the role of food as a way of showing love and sharing stories, is that you are allowed your own private reflection and ritual. You can close your eyes to the company and retreat. I don’t always manage this contemplative silence in the face of philistines, but I’m buoyed by Proust’s persistent search for exactly what provoked his memories of Chambray.

I will sit at our table, inhaling earth, musk and dark fruit and hear again the chink of raised glasses as we toasted to Monsieur Proust, an evening when I was responsible only to the words on a page.