My insta feed is all about Slow Fashion October – a movement that challenges the idea of fast fashion of the kind produced by stores such as Supre, Zara and H&M. Slow movements aren’t new – the slow food movement was one of the first which had an enormous impact on the industry and raised questions which still reverberate today. Slow fashion and ethical fashion movements also investigate the carbon footprint of fashion choices, the longevity of items of clothing, the working conditions of all involved in the process of garment manufacture – many of which are successfully hidden from the consumer. (The worker conditions became a little more transparent after the deaths of so many garment workers in Bangladesh in the Rana Plaza tragedy but, despite the attention this gained worldwide, it’s debatable that those conditions have changed significantly.)

Many sewists  see Slow Fashion October as a chance to think about their contribution to the complexity of the issues (where can you buy ethically sourced fabric? is bamboo sustainable? organic cotton’s okay, isn’t it?) that surround the craft of sewing your own clothes and plan some actions around embracing a more sustainable practice. 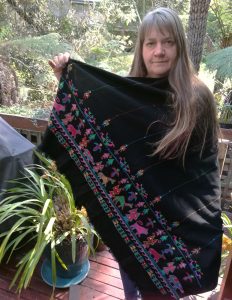 One of the questions asked in the Slow Fashion October prompts is ‘What is the oldest or the most treasured thing in your closest?’ I own a woven wrap I asked my mother to buy me for my 25th birthday. It came from a vaguely Central American shop in the Royal Arcade and was hugely expensive back then to someone on a part-time income. I think it was about $40 – but we’re talking eighties, folks! The key entrancing factor was the embroidery that edges it – folk art, vivid and colourful. It’s a kind of Kahlo shawl – not that I thought of that connection then. I just wanted it. I still wear it and every time I do, I relive my pleasure in receiving it.

This, you may think, has nothing to do with writing. But you forget – I’m perfecting the art of the unlikely segue!

What is the first poem or poetry collection that moved you? Do you still have it? Find a line, a thought or a title and use that to trigger your own poem which might be a celebration, a recognition or even a rebuttal of your early infatuation.