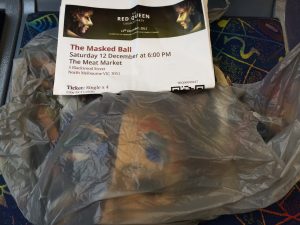 On December 12th, a crowd of people attended a book launch like no other at the old Meat Market in Melbourne. This was, of course, the launch of the seventh book in the Obernewtyn series, a fantasy series begun by Isobelle Carmody when she was only fourteen and finished, more than four decades later. The Red Queen Masquerade Ball was a fitting finale – triumphant, bitter-sweet and beautifully spectacular.

Many of the crowd, suitably masked and costumed, had followed the protagonist’s journey from their own childhoods into adulthood. The books had become inextricably connected with their own stories – the first read under the desk at high school, a later volume on a Gap year in Europe or Asia, and finally, The Red Queen, consumed  in snatches while a first child naps.  They had entered Obernewytn with Elspeth Gordie and her journey and the values at the heart of the series had helped them identify their own.

It’s a cliché to imagine that all avid young readers are nerdy, isolated and a little outcast from the in-crowd, popularly portrayed as cool fashionistas or sports jocks. Like all clichés, there’s some truth buried in that stereotype – the young reader who willingly gives herself or himself over to an imagined land and characters is likely to live in their own heads a little more and speak a slightly different, more internal, language than those totally engaged by and occupied in the real world. It’s easy to feel like a misfit at any age when you don’t fit in – and books like the Obernewtyn series which celebrate the power of idealism and non-conformity are godsent to those of us who have spent any time misunderstood, under-valued and questing for a life not given currency by society.

It feels a little futile to add my best wishes to the success of The Red Queen. The book is as launched as ever a book could be and has already been devoured by innumerable readers. But I do add my own godspeed, not just to The Red Queen, but to the whole armada which is Obernewtyn. Books that change lives, that create communities and that urge us all to be the best people we can possibly be need to be celebrated and honoured.  Long Live the Queen!