After the chaos of Christmas…

I always like the after Christmas period – a time to take stock of what worked during the year, what didn’t and where to go next. For 2015, I constructed a six page excel spreadsheet called Plan for Happiness. I know, raise your eyebrows, roll your eyes – is happiness ever going to be achieved by an excel spreadsheet? Particularly one that included such high-minded advice as entering writing competitions, finding more community, keeping a reading diary and completing NaNoWriMo again.

I cannot actually think of one writing competition I managed to enter – although I have a sneaking suspicion I did send something to the Fish Short Story Prize and was long-listed along with 100 or so other hopeful writers.

The Poetry Circle I was part of (which formed some of my community) disbanded due to the overseas and domestic commitments of its members.

My reading diary tells me I read nothing after September! Now, I know that’s not true!

My NaNoWriMo plans were derailed by some health issues.

This year I’ve abandoned the excel spreadsheet approach – it was just too depressing to review it and see all those unmet goals! I’ve yet to find the perfect format, but it needs to be user-friendly and less involved. I suspect, despite that, at the heart will lurk the usual suspects: create more, gather more, chronicle events and reading.

What will also have changed in 2016 is that I have a Catty Shack, built for me by the 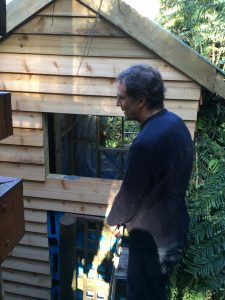 Accountant, partly, I’m sure so he could avoid the mounting sewing mess taking over the lounge room. It’s a great space that I’ll use to separate some aspects of my working and creative life. I’ve been hemmed in by my l-shaped desk in my dark office to the point that sometimes I turn on the computer and then walk straight back out the door – not a good move if you actually want to get anything done! The Catty Shack is novel, inviting and light.

I’m also going back to memorising poems. More on that later….