Raining outside and in

Oh my goodness, we’ve had a blast of winter weather here in Melbourne. We have woken up to mist so dense we’ve not been able to see our back hedge and we’re back to wiping Winter’s paws before we let her inside. That’s Winter the dog, not the season. It is an odd name for a dog – she’s a rescue, and we didn’t want to change it. It did, however, afford the Dog Park people much pleasure because they could collectively shout as she dashed to do a meet and greet, ‘Winter is coming!’

This time of the year should make my knitter’s heart sing. But instead I find myself reaching for my journal to write endless lists of what makes me happy, as though I’m already staving off despair. It doesn’t help at all that our ducted heating has gone on the (temporary) blink and because of where the mother board is, it can’t be fixed until the rain stops.

One of the lists I’m making is my winter sewing plans. I bought some wool recently at Drapers and I’m making a replacement grey straight skirt to replace the beautiful one I wore so much two winters ago. It had little dark grey birds all over it and I loved it but somehow it went through the washing machine and shrank. So sad. I bought a red in the same wool and plan to make an LB pullover which I might well wear the skirt.

I’ve also just finished a summer version of the Wren dress which I’ve made without the cuffs on the sleeves – and without buttonholes – sheer laziness. I have a very fine wool and I think it will be a super-warm Wren dress – the thinness of the wool should allow me to gather the skirt. I did lower the hemline of this pattern – I want to be able to bend over in public without fear. I love this pattern – it’s not as over-sized as many of the gathered dresses around and I think it really suits a winter iteration.

I also want to make the Steel pinafore by Elbe Textiles. I inherited some lovely plaid when my daughter went overseas and it would be perfect for this garment – and it would be so versatile. After that, it’s conquering shirts. I would like to face the shirt with firm resolve, rather than a quaking heart at the idea of the collar.

I wonder why, actually, we tend to sew things for the season that’s just on the horizon? It would be great to actually begin the new season with a sprinkling of never-worn surprises.Which is what I hope my shirts will become!

My other joy at this time – or any time of the year – is reading, of course. What I would love is a big, engrossing fantasy series of about six or seven books that would see me through some of this season, interspersed with some other reading, of course. I’ve looked around, though and it’s hard to find exactly what I want. Suggestions gratefully received! 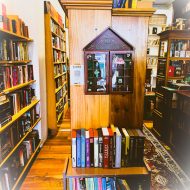 Through the Looking Glass Bookshop

Until I find something of that nature, I’m going to embark on a bit of a reading and re-reading the classics. I want to re-read War and Peace, for a start. But, I’m also doing a read one unread book in my shelves for every new book that comes in. Which is a tad challenging as I’ve just started Mick Herron’s Zoe Boehm books. I’ve been a long-time fan of the Slow Horses series (and I note a new one is out in May!) So I have my crime fiction covered, thank you.

And then there is writing – I’m finishing the novel, but it’s slowly slowly. Part of that is time and part of it is stuckedness. In the meantime, I’ve ordered a new book (shhh – it doesn’t count, okay?). It look likes a great book for exercises and I figured I’d just work my way through it. It’s The Craft, A guide to making poetry happen in the 21st Century, edited by Rishi Dastidar. I don’t know what I’m dong with my writing life at the moment – there are whole weeks when it just seems too hard to balance all the aspects of life I’m currently juggling and writing at the same time. Then there are other weeks when I knuckle down and just claw one hour from a few days and feel much better for it. It’s up and down. I guess it will just be like this for a while. I’m trying to treat myself gently – care-giving isn’t an easy task. There’s a lot of ambiguous grieving involved. It’s often easier to make a straight skirt, cast on some knitting or make soup. All of which are fine and good things to do, particularly when it’s raining outside and inside.