I’ve been teaching a class on the Beat writers – specifically Jack Kerouac, Allen Ginsberg, Anne Waldman and Diane di Prima. I’ve re-read On the Road and some of Ginsberg’s poetry and reaquainted myself with some of Waldman and di Prima’s poetry. I stepped into another era – it wasn’t just the work – that sings with a kind of fierce, unbridled joy of experience – but also the attitudes that surround that work. 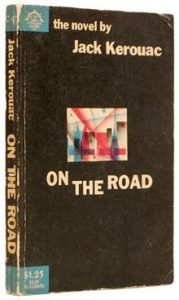 Experience is the key word to understanding the Beats, but we all knew that. Underneath the enromous regard for gritty personal experience is a consistent, generous engagement with the world. The beat poets I’ve mentioned here were – and Waldman still is – political activists. Ginsberg is well known for his pacifism and his crusading for gay rights. Waldman was part of Occupy Art – an offshoot of the Occupy Wall Street movement. Ginsberg’s generosity to his fellow-writers meant that for years he worked as unapaid agent, helping to even type up manuscripts.

Reading about them and rereading some of the work, I can’t help but feel a little sad. Ginsberg and Waldman were celebrities – Bob Dylan invited them both to tour with him in the Rolling Thunder tour. I don’t know of a single Australian poet who is so well-known. But that doesn’t make sad, exactly (although it would be splendid to be the poet-in-residence of a rock tour!). It’s more that I think that we’re less bold these days. We’re more careful and less exuberant. Some of the wild joy has receded and been replaced with anxiety – economic and social anxiety. Certainly that’s true in my own life. Half my poems don’t emerge from my own private journal – I’m too worried they are hackneyed. But, nor do I spend the amount of time that I should on experimenting with new forms or refining images. It’s a self-defeating merry-go-round.

Of course, Ginsberg, too, despaired – he was worried he would never write anything as good, as authentic as ‘Howl’. But that didn’t stop him trying and he went on to write ‘Kaddish’ a long, sometimes narrative, sometimes incantatory poem about his mother’s life and death which is almost painful to read, it’s pain is so raw.

Waldman’s The Iovis Trilogy arrived in my letter box recently – all 1000 pages of it – a mixture of poetry, extracts from letters and journal entries – twenty-five years of work! I looked at my own three small poetry collections and weighed them in my hand, feeling timid.

So the last few weeks have been about recognising the importance of bold exuberance, applauding risk-taking and staring down timidity.

I’d have to say that none of my work reflect this – yet. I’m deep in revision hell. Although, I’d have to say this morning I did launch exuberantly into my revision. I boldly struck through sentences and scrawled new ones in the margins. I thought about my central character and how she could be a little braver.

Maybe I’m slowly learning from the Beats? I hope so. It’s been a wild ride over the past month or so and – with some reservations (looking at you, William Burroughs!) I’ve enjoyed it.