Literary Feasts and other musings.

I’ve been reading Nigel Slater’s The Christmas Chronicles recently, as much for his musings on winter, rituals and memory as for the recipes that pop up in this book, like glace cherries in the dense molasses dark of a good fruit cake. I found, and earmarked, a recipe for gnudi – I bought a whole round of ricotta cheese very recently and there is a little over a quarter still in the fridge, so gnudi sounded like a great idea – and that made me think of food in literature. What are the great food scenes?

Of course, there’s Proust and his delicate madeleines. And Mrs Ramsay’s glorious dinner party in To the Lighthouse, during which Lily Briscoe solves a composition problem. Pip’s stolen ‘vittles’ for Magwitch. The March’s Christmas dinner which is given away. There are numerous midnight feasts in boarding school stories. And the ground acorn flour impressively made by Sam in My Side of the Mountain – a definite step up from most runaway food.

It’s really interesting to think of the role food plays in narratives – it’s presence, or it’s absence. These thoughts sent me scuttling to one of my cookbook bookcases where I found Kate Young’s The Little Library Cookbook, 100 recipes from your favourite stories. I emerged sometime later to note that it was the second time in the one day I’d come across a reference to J. D. Salinger’s novel, Franny and Zooey. Which, of course, I now want to read. The first reference was from The Paris Review – who are running a series of columns on literary paper dolls. The first featured Cassandra from Cassandra at the Wedding by Dorothy Baker, another novel I haven’t read which is now on my to-read list. The whole idea of a literary paper doll is utterly charming. You can print out your own from The Paris Review website.

By the end of this excursion, the bed was littered with books, gnudi had not been made and I was no closer to deciding on a recipe for Christmas cake. And, needless to say, I was hungry. The whole afternoon, however, has made me determined to pay more attention to the role of food in narrative – why it’s used, when it’s used and how.

In the book I’m currently editing, I’ve used food extensively throughout. It’s a book set in the WWII period when there was generally more ritual around food and family life. But the rejection of food is also used to score points and my protagonist, who doesn’t suffer from the nerves of her elders, is called ‘solid’ as a rebuke. I say currently editing, but the whole afternoon has slipped past with no editing done. Instead I’ve salivated over mince tart recipes, remembered Lily Briscoe and added books to my reading list. Not a bad way to spend an unseasonally cold and gloomy December afternoon in Melbourne. Now to print out those paper dolls… 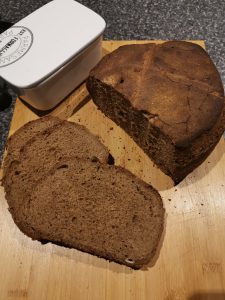