Teaching poetry in schools, a mini-review and an invitation.

What a year! I note, with shame, that the last post I wrote here was in the middle of last year when we lived in a different world. In between then and now my husband and I have sold two houses and bought a new one, the world has staggered under the pandemic, Melbourne has undergone two lockdowns and the US is on tenterhooks. New terms have entered our language like the new-normal. We have some different verbs, too – we Zoom. We yearn for Pre-COVID days and habits and dread a masked summer. We’ve become adept at keeping in virtual contact – or we haven’t, depending on access to and understanding of technology.

Many of us, I’m sure, had big Lockdown projects. I failed to do much except learn brioche knitting, listen to audio books and watch my new garden move slowly through four seasons.

Now it feels as though the heaviness has lifted a little and I’m back editing my World War Two novel and thinking through the next steps for Tyle&Bateson. We’re excited to be launching a series of webinars via Zoom. Many of these are based on the common issues we discover appraising manuscripts, but the first is a professional development opportunity on sharing the joy of poetry in the classroom. This is a subject very dear to me!

My preparation for this has taken me back to the stack of books about writing poetry with school students and I thought I’d just post a mini review here of one of my favourites, Kenneth Koch’s Wishes, Lies and Dreams. 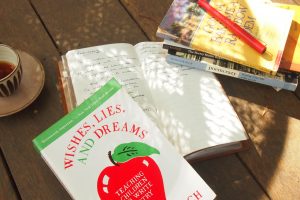 Not a lot has changed in schools since Ron Padgett, another U.S. poet wrote in his forward to the HarperPerennial edition of Koch’s book  20 years ago, ‘…poetry – reading or writing it – intimidated most teachers, whose training had not prepared them for this seemingly remote and specialized art.’ What is so terrific about Wishes, Lies, and Dreams is not only the practical exercises Koch discusses candidly, chronicling his successes and failures, but also his reflections on the exercises, the examples of other poems he shared with his student and, perhaps most of all, the poems written by the students under his teaching programme.

When I first started running poetry workshops as a writer-in-schools, one of the things that concerned me was the way that the students would sometimes copy each other’s lines – but Koch relaxed me about this. He noticed that when he took the work of other students into classrooms it ‘wasn’t copying that was going on but something more like the usual artistic process of learning through influence and imitation.’ I’ve found this, too, when students have sometimes swapped lines or added to each other’ s lines.

Another important thing I learnt from Koch was not to be down-hearted when a particular idea didn’t work in a particular classroom. It’s important to learn to read the signs and move on, without either regret or a sense of failure. It’s important, for that reason, to plan for more poems than you really have time to write. I use a lot of ‘recipe’ poems – poems that have a given structure and directions – so that no student can fail to produce a poem. Like any recipes, every student can make them absolutely their own, by adding different ingredients, tweaking directions and expanding on the original idea.

Koch beautifully evokes the magic that takes over a classroom of children engaged in acts of creation – a buzzy, irrepressible and infectious energy. I did a stint at Thomastown Primary School – it was a week or, perhaps, a fortnight’s residency but stretched over the term – and I arrived one morning and one of the students grabbed his dad and said, ‘Dad, dad! There’s our poet-lady, I told you about!’ It was such an honour to be claimed as ‘theirs’. Koch’s writing reflects that, too – the joy of working with children whose approaches to poetry can be imaginative, intuitive and fearless. ‘…writing poetry,’ Koch says ‘makes children feel: creative, original, responsive, yet in command.’ It’s such a delight to watch that unfurl in a classroom and be a part in its making.

I’m looking forward to sharing some of my ‘recipes’ with anyone interested. You can book a ticket to the event on Eventbrite. I’m running two sessions, one on  Thursday 19th November in the  evening and one on Saturday 21st November at 11.00 am. Participants will attend an interactive webinar with lots of hands-on exercises, using many of my own poems as models and they’ll receive a workbook after the event. If you would like to attend but can’t afford the ticket price, let me know.