A mini-review – Lincoln in the Bardo by George Saunders 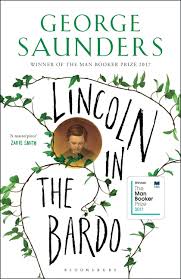 There are books whose voice or voices you begin to miss as soon as you reach the end and for me, Lincoln in the Bardo by George Saunders was one of those books. It is just such an original book and the audio version, which I’d been listening to, is impeccably produced with a large cast of actors. For those who have yet to catch up with Saunders‘s debut novel, it tells the story of Willie Lincoln’s time in the bardo, the state of consciousness between death and rebirth in Buddhism – particularly Tibetan Buddhism.
In Saunders‘s novel, the bardo is inhabited by semi-spirits who stubbornly resist the idea of death and the next phase of the afterlife. After dying from typhoid, Willie Lincoln enters this liminal place – but it isn’t his arrival that provokes the consternation of the inhabitants of this bardo, used to the comings – and goings of their fellows, but his father’s loving, stricken visits during which the President lifts the body of his dead son out of his coffin, speaks to it and caresses it with grieving love. These acts challenges the other inhabitants of the bardo  to look beyond the confines of their own fears, self-loathing and yearnings to a new understanding of their common humanity.
The novel is written largely in dialogue – Saunders originally conceived it as a script – which is interspersed by both real and fictional historical accounts of the great dinner the Lincolns held the night of Willies death, the aftermath of his death and Lincoln’s life and influence – all set against the backdrop of the American Civil War. These accounts overlap, contradict each other and reveal the fallibility of memory and our human need to fix moments and impressions in some kind of sticky amber – whether in a diary account or an Instagram post. Not being American I understand the primary importance of Lincoln to the American narrative and psyche on an intellectual level, but I don’t know it in my bones. However’s Saunders‘s ‘scrap book’ approach conveys the national figure endlessly under scrutiny – benign or otherwise – as though reflected by different mirrors. It’s a neat device which contrasts with the accounts given of Lincoln by the semi-spirits who witness first-hand his visits to Willie and who eventually inhabit the President, merging their consciousnesses.
The novel feels Dickensian and sprawling – although the main events take place in a constricted time and setting. Partly this is the sheer diversity of voices and stories. There are three central protagonists, Hans Vollman, Roger Bevins III and the Reverend Everly Thomas – each of whom tell the stories that led to their confinements in their ‘sick-boxes’. But we hear the stories of more than these three –  any waiting room can become a confessional space and these semi-spirits reveal fragments of their lives in ‘the previous place’ in snatches of experience and emotion, sometimes repeated or commented upon by their fellow inhabitants. The characters are wonderfully real and inventive. The central trio –  Roger Vollman, with his engorged member, killed on the very day he was to consummate his marriage after considerable – and considerate – delay; Bevins, a closet gay who regrets his suicide moments after slicing his wrists and whose love of everyday life has give his spirit-self several noses and pairs of eyes and the Reverent who knows he is dead but refuses the passage to the next life for his own reasons are powerfully different. But we also see the others  in striking glimpses which manage to convey whole lives in different registers from the colloquially profane to the lyrical.
Why did this book have such a profound effect on me? Partly it’s the language – comically grandiose, foul-mouthed and poignant by turns. But it’s also the tenderness at the heart of the novel, the call for compassion and empathy and the striking portrait of a public man struggling under the weight of private tragedy – a tragedy, he knew, was being played out in homes across the nation as the Civil War continued.  Is this a sentimental novel? I’ve been asking myself this for a while now, and I suspect it is, in part. I’d be interested to know what others think.
Above all, Roger Bevins’s lyrical notation of life’s small random moments of joy stayed with me, haunting me with their shadow side of loss but joyful still, for all that:

Geese above, clover below, the sound of one’s  own breath when winded.
The way a moistness in the eye will bur a field of stars; the sore place on the shoulder a resting toboggan makes; writing one’s beloved’s name upon  frosted window with a gloved finger.
Tying a knot on a package; a mouth on yours; a hand on yours; the ending of the day; the beginning of the day; the feeling that there will always be a day ahead.
Goodbye, I must now say goodbye to all of it.
….
These things and all things started as nothing, latent within a vast energy-broth, but then we named them, and loved them, and, in this way, brought them forth.
And now we must lose them.  (p. 335)

No Comments »
Tags: George Saunders, Lincoln in the Bardo, mini-review, reading as a writer
Posted in Latest news