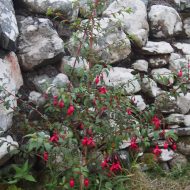 Arrived in the bus from Galway – a mesmerising trip through the countryside – to be whisked by Australian/Irish poet, Robyn Rowland  straight to a reading by Tom McCarthy, who was a last-minute replacement for Paul Durcan. It was a fascinating reading, not the least because McCarthy placed himself in opposition to Durcan politically in a host of references I rarely understood. It was an introduction to the lengthy introductions the male Irish poets append to their work. I’d have to say that McCarthy’s were interesting in themselves, although I have a lot to learn about the subtler points of Irish history.

The next day was packed – beginning with a lecture by Professor Roy Foster on ‘Stations and Islands: Litearture, Memory and Negotiating with Irish History’, essentially on Seamus Heaney. I loved his point that Heaney had an ‘authorial courtesy’.

Clifden Writer’s Group – there were a couple of good, effective short stories read at this and it made me yearn to be part of an active, supportive writers group myself.

I was most impressed with Vona Groake and Paula Meehan’s work which were less informed by  political/religious arguments and traditions I didn’t fully understand.

I would have to also say that I was becoming quietly terrified at the idea of reading the next day. Most of the readers we’d heard are revered figures on the literary scene. Both Michael Longley and Paula Meehan had done terms as the Ireland Professor of Poetry, a seat which was created by Seamus Heaney after his Nobel Prize Award. Most of them are members of Aosdana which, I understand, to be almost as difficult to get into as L’academie francaise. To join , you need to be elected by members – you can’t put yourself forward – and a wide variety of art forms, including architecture, are represented. There’s also a limit to the number of members at any one time – its currently 250 individuals. Not many across so many artforms! Some members receive a stipend from the Aosdana (or the Arts Council of Ireland) to enable them to work full-time. I don’t know what it is now, but it seems equivalent of a $20,000 Oz council grant – but it lasts five years.

If a member is bestowed the title ‘Saoi’ (literally, ‘wise one’), the highest honour members of Aosdana can bestow upon a fellow member, they are honoured in a ceremony during with a gold torc is placed around their neck by the President of Ireland. No more than seven living members can be honoured.

The organisation has attracted criticism, obviously. It’s seen as a clique, the honour of Saoi feels archaic and many artists rebel against the idea of being beholden to a state-funded ‘wage’ for five years.

I just felt a little scared. I had a cold, so fortunately, I could focus my fear on not coughing, rather than being inadequate.

In the event, it went well. We didn’t get the same crowd as the other readings – but this was due to a clash with the GAA – apparently this happens every year. The Australians are relegated to that timeslot when the majority of the audience take to the bar where they can view the match on a big screen. It would be the equivalent of doing a reading at the same time as the AFL Final.

Nonetheless we had a respectable audience of about 40 people, I didn’t cough, we all kept to the time and the feedback was excellent! I read with Jane Williams, a Tasmanian-based poet whose work I admire and an Irish singer/memoirist, Eileen P Keane. An extract of her memoir has been recently published in The Dublin Review – it’s excellent – and she wove some songs through reading some pieces from this.

My confidence restored, we went to enjoy a one man show, ‘I Hear You and Rejoice’ with Mikel Murfi, who shape-shifted through over an hour to reveal the story of an unlikely marriage been mute cobbler Pat Farnon and the irrepressible Kitsy Rainey. It was an acting tour de force.

Clifden Arts Festival is a whirlwind week – Monday began with the book launch of The Deep Heart’s Core, which I reckon will give me an insight into contemporary Irish poetry as the idea behind the anthology is that each poet selects a touchstone poem of their own and then introduces that poem in 300 words or less. It’s a clever idea for a showcase anthology.

After that we zoomed down to the Footsbard Tent and heard Dordan, a trio from County Galway – Mary Bergin on the tin-whistle, Kathleen Loughnane on harp and Deabhail Standun on fiddle. The music was superb – the tin-whistle as unfaltering as bird calls – but the rapport between the women was heart-warming – they were teasing, loving and respectful of each other. The whole thing was a delight and the stories they told were charming.

I went to one final poetry reading during Clifden Arts Festival – but I’ll write more about that in a longer poetry post. Then it was on to Galway for my second Irish poetry reading!